I paid a visit to the National Food Bloggers Bake Sale that was being at Cabbagetown Market in Atlanta.  Tami from Running with Tweezers with the  help of other bloggers help put this wonder event together.  A bunch of bloggers and bakers donated baked goods such as cookies and various dessert to raise money for  Share our Strength which is a charity that helps fight childhood hunger.   I learned of the the bake sale on Thursday night so it was  way too late for me to contribute any baked goods, but I was going to show my support.  I must say the spread had me drooling, there were cookies of all kinds, pecan bars, croissants, cupcakes, lemon drop shots and many more desserts.  I decided to try the items that were a little unusual.  I purchased Lemon drop shots that was made by Mele Cotte and the Triple Cs cookies by Quick and Dirty in the Kitchen. 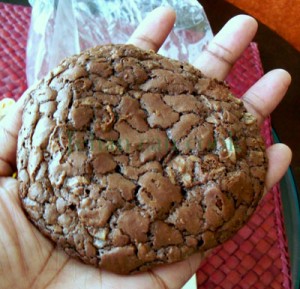 These two treats were divine, I had a hard time not eating it all.  I did have the pleasure of meeting Patti of Anatomy of a Dinner Party who was very bubbly and quite delightful.  Nice job ladies!!

After the scarfing down the sweets in my car I drove to Whole Foods in search of culinary lavender.  All week I’ve been thinking of making a Lavender and Honey Rice pudding but have been unable to find lavender, I finally tracked some down at the Whole Foods on Ponce De Leon Ave.  Much to my dismay the parcels of lavender were mostly leaves with a few buds, I found the one with the most flowers and decided I was going to have to make it work.  I made my way home with my packages and was excited to get started, I was ready to take on this new ingredient that I’ve never cooked with before.  After much dibbling and dabbling in the kitchen the end result was a rich and creamy and aromatic dessert, but I didn’t get much of a lavender flavor.  Maybe I didn’t put enough or maybe the honey overpowered the Lavender, because I was able to taste and smell the lavender before adding the honey.   Next time I will try using more lavender but this rice pudding was divine nonetheless.  Between the cookie, lemon drop and the rice pudding, I think it’s safe to say my diet is out the window…sigh.

Over a low fire, place milk, cream and lavender and simmer.  Allow milk to heat up but do not allow to boil.  I let it simmer for about 10 mins, then strain to remove the lavender.  You can also allow remove the pot from the heat and let it steep for 30 mins.

Return milk to a low fire; add rice and salt.  Cook for about 1 hour, add honey and vanilla bean paste and cook for an additional 5 mins.  Remove from fire and allow to cool, the rice pudding  should thicken  as it cools.