Please don’t click that red x at the upper right corner of the page or navigate away from my cheese tarts.  I implore you to give my “rustic” tarts a fair chance.

It may not be much to look at but these seemingly simple creations have lived in my mind for the past 17 years.   My desire to recreate those moments of bliss that I experienced as a child has lived on in me, and has driven me to make these Cheese pies.

There was one place in Georgetown that I know of that made these delectable savor pastries and that was Arapaima, a pastry shop practically next door to Sacred Heart Primary School.  I attended that school in the early 90s and spent many lunch breaks at Arapaima.  As its name suggests, it was named after a fresh water fish found in South America.  As you enter the  doors you were greeted with a nautical theme, nets made of rope draped and wheels of ships adorned the walls.

How is it that after so many years I have such a distinct memory of a place that I’ve visited as a child?  I believe it’s because that’s the moment that my love affair with food began.  These are my earliest memories of paying attention to how food tastes, and to not just eat but have an experience.

After migrating to the US, I always had a yearning for these pies but just didn’t know where to find it or how to make it, until one day!  I had the good fortune of tasting something called “quiche”.   My heart soared, could it be??  It most certainly was a form of the “cheese pies” that I longed for.

I kept this recipe fairly simple, because that’s what the cheese pies were, a creamy, cheesy custard with a hint of pepper and scallion encased in a flaky pastry crust.    I found a recipe for pastry on Allrecipes.com but modified it a bit buy using half butter and half shortening because everything is better with butter. 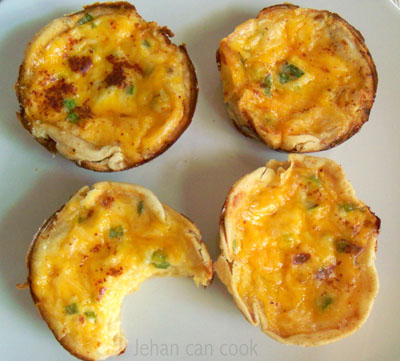 Mix flour and salt together in a bowl. Using a fork or pastry cutter, cut butter and shortening into flour until the mixture resembles coarse cornmeal.  Add 3 tbsp of water and mix until well combined.  Wrap in cling wrap and refrigerate for at least 30 mins before using.

Preheat oven to 350.  In a bowl, mix flour with egg, mix until well combined and smooth.  Whisk in milk, then add all other ingredients, except cayenne pepper and stir.  Set aside.

On a lightly floured surface, roll pastry to 1/8 inch thickness, in other words, pretty thin.   I used bowl about 6 inches in diameter  to cut out the circles. Line muffin pan with pastry, lightly press.  If the pastry becomes too soft, making it difficult to roll, place it back in the refrigerator for a few minutes to chill.

Bake crust for 5 mins, then remove from oven and spoon filling into the crust.  Return to oven and bake for an additional 15-20 mins.   The tops should puff up when they are done.  Remove from oven and allow to cool before eating..if only I could have waited that long. 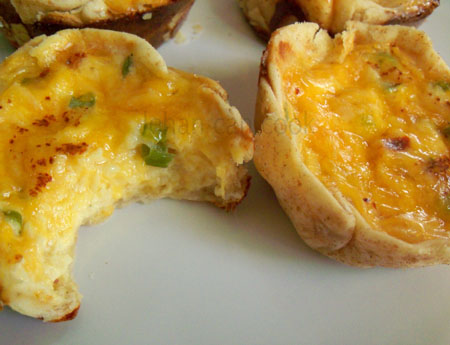