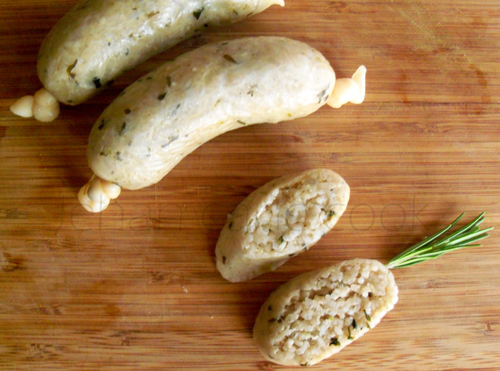 This is the most challenging task I’ve encountered since starting this blog.   I knew that it was going to be difficult since I had no recipe and no experience and just my taste buds to guide me, but I underestimated this task.

When I decided to take on making black and white pudding, I called my mom and asked her for a few tips–she’s never made black pudding but she has made white pudding in the past.  Her only tip was lots and lots of married man pork (basil).   This was followed by a stern warning–“if you decide to make black pudding be prepared to never eat it again, it’s not for the faint of heart.”

“Mommy, I have a stomach of steel and can withstand the sight of raw blood mixed with rice and still gobble down the black pudding.”   That was my response…until I got to the store.   Being the time of year, I’m assuming some of the other customers probably thought it was for Halloween, after all what would you do with 3 yards of runners/intestines and a tub of cows blood??  Just the sight of this tub of blood was too much and I left the store with just runners in hand.

I soaked my runners overnight in half vinegar/half water mixture to ensure that it was going to be clean and ready for the  next day.  The next morning I woke up with much excitement and a bit of trepidation. I was eager to finally make this dish of mystery, but a bit fearful of failure and of the 3 yards of scary that sat on my top shelf in my refrigerator.

I gathered all my ingredients that I thought belonged in white pudding and went to work.  At first it went off without a hitch, it seemed as though I was going to be the victor.  My flavor was on point, my makeshift funnel worked(a water bottle cut in half), and my white pudding was looking like the real thing.  But then the unthinkable  happened.  I placed the first 2 puddings into the boiling water and allowed it to boil for 20 minutes, when I returned I was met with a soup of rice, seasoning and a shrivelled up piece of runner that had shrunk to the size of my pinky finger.  My white pudding had exploded.

I called Kanema with much defeat and she laughed…and laughed, then she said “I will call you back”.  How rude I thought.  Five minutes later she called with tips on how to make white pudding–she called a cousin that sells white pudding and sought her advice.  Here are the tip I received:

-The rice should not be too hard, nor too soft.  If the rice is too hard it will tear the casing and cause it to burst.  If it’s too soft it will turn to mush and have an unpleasant texture.

-Make sure to fill the runners, leave no air bubbles, but don’t over stuff

I was elated, finally some direction–nothing can go wrong now!  Ha!!  And I laugh because I made a total of 8 sausages but only managed to have just 3 that remained in tact.   I was totally defeated at this point, I even managed to burn my tamarind chutney in the midst of maniacal chaos that had taken over my kitchen.   I cut into the white pudding and took a bite…could it be?  Not only did it taste like white pudding–dare I say it??  It tasted great!!   I gobbled up a few more pieces and  saved the rest of my “white gold” in order to take photos for my blog.

Will I take on this task again?  Time will tell.  Will I ever make black pudding?  Without a shadow of doubt-no.  I will leave u with this tip,  the difference between black and white pudding is the addition of the blood to the cooked rice and before you stuff the runner.   Be brave, I will however continue to buy black pudding.

Place runner in a bowl with enough half vinegar half water mixture to cover.  I left it over night, but about a hour should be enough.  Clean runners making sure to remove all  particles, if there’s any(mine were clean).  Rinse and set aside.

Melt butter over medium heat.  Add chopped onion and sautee for 3 minutes, allowing to soften.  Add garlic and sautee for 1 minute then add coconut milk and water.  Add thyme,  scallion, pepper, all spice, beef bouillon, salt and half of chopped basil, bring to a boil.  Add rice and stir to loosen lumps.  Turn heat down to low and cover.  Cook for 15 minutes.  Rice should be soft and not mushy, remove from heat and allow to cool. Stir in remaining half of basil.

Using a funnel, push rice into runners being careful not to pierce it.  I used a round tipped butter knife.   When sausage is desired length, cut and knot both ends.  I made 6 inch long sausages.