Last week on the blog I shared that I wanted to do some budget friendly updates to my kitchen and what I had planned.   If you missed it head on over to read about how I plan to upgrade our kitchen.  Today I’m going to share which appliances I chose and why we chose what we did for our kitchen upgrade.  When we lived at our previous home we had all Whirlpool appliances, our fridge, stove, microwave, dishwasher, washing machine and dryer were all Whirlpool.  We had them for 10 year and they all worked great.  In the 10 years that we had those appliances we’ve only had to replace the motor on the ice maker (I can’t live without crushed ice) and we had a minor repair to the washing machine, that’s it.

I’m not a brand loyal person but I do know quality and when it is proven, I tend to stick with it so I was pleased to know that Lowe’s carried Whirlpool and had exactly what I was looking for.   I was sorely disappointed when I saw the appliances that our builder offered.  None had the functionality or the esthetic that I desired, even my husband who doesn’t care much about those things agreed.  I knew I wanted a modern sleek look to go with our new backsplash that we had installed ourselves!  Yes, my husband and I tackled this project on a weekend and it cost us half the price it would have if we had paid someone to do it, I will share that in the reveal next week!  We have been living with our new appliances for a little more than a month and I am in just as in love with them as I was the first day.  Here are the appliances that we chose and what we love about them: 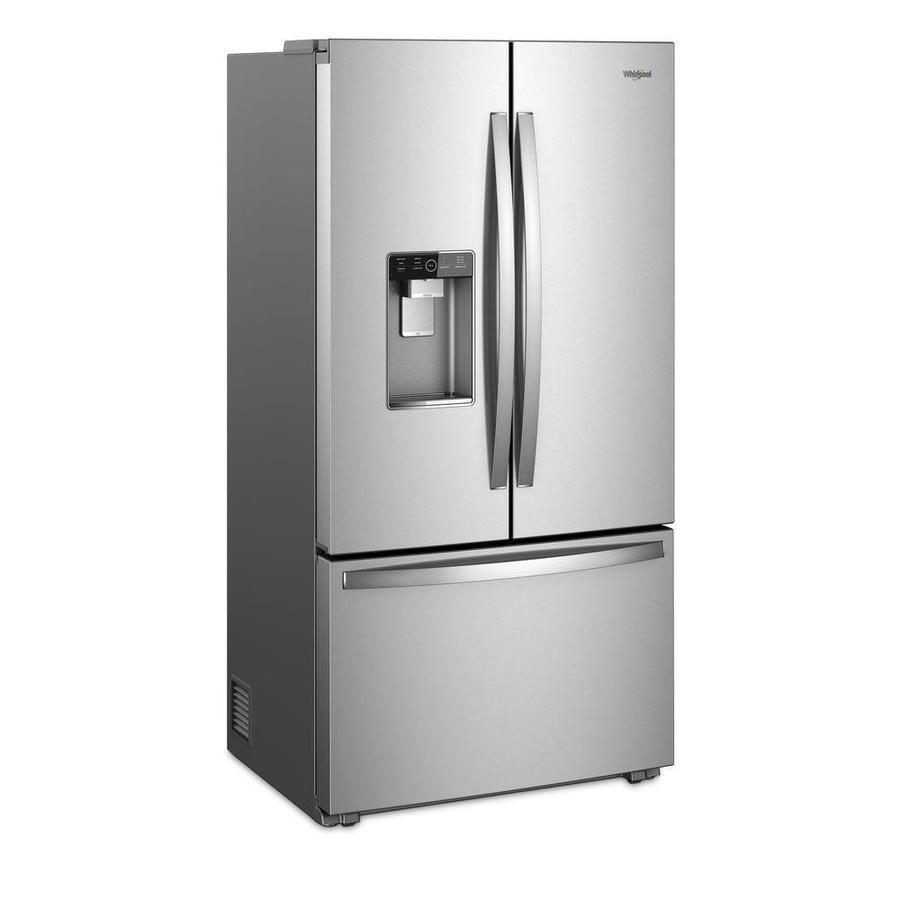 I wanted the upgrade our old side by side and this counter depth fridge is just that.  To say I’m in love would be an understatement.  I love the sleek appearance and the French door layout gives us a lot more room in the fridge.  I was nervous about losing space by going with a counter depth refrigerator but it was exactly the opposite, we have a lot more room than our side by side  (which was larger in cubic inches) and because it’s counter depth nothing gets lost in the back.  The LED lights gets me every time that I open the fridge!  The one feature that I thought would be a waste of space turned out to be extremely functional and that’s the platter drawer.   It’s great to have a huge casserole dish tucked away on the sliding shelf but it can be used to store so many other items like trays of eggs, berries, butter and so much more.   It’s my favorite feature of this fridge.  It’s going to come in handy when the holiday’s roll around because it holds about 2-3 large casserole dishes. 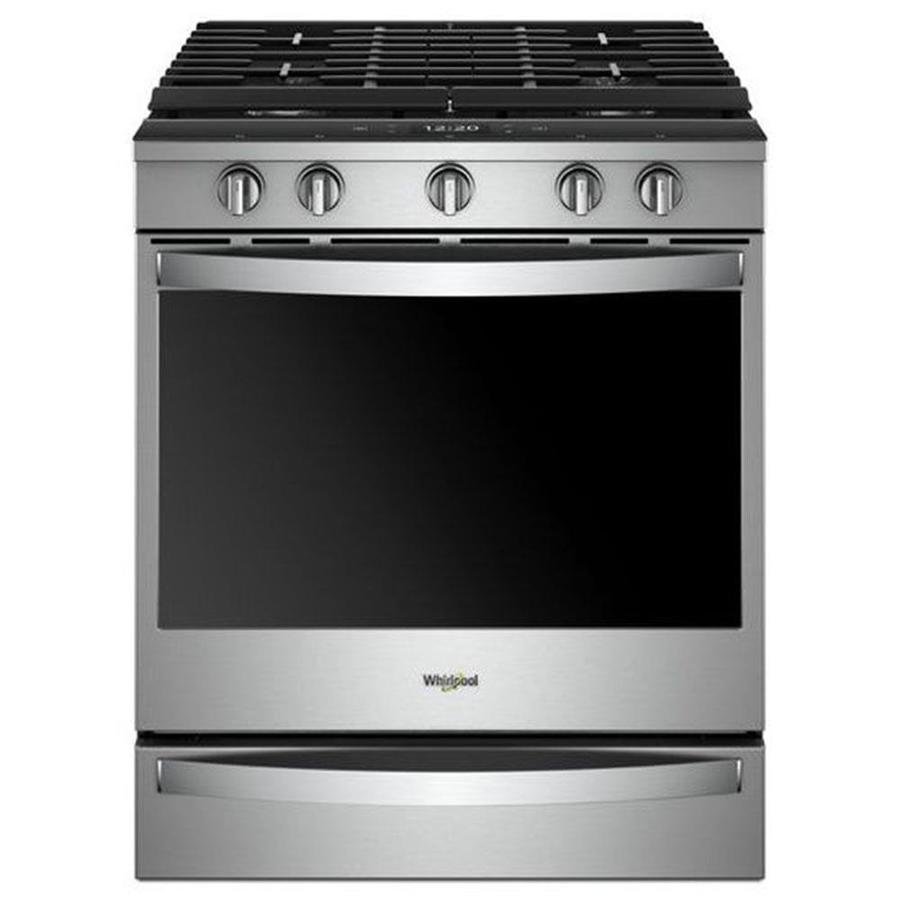 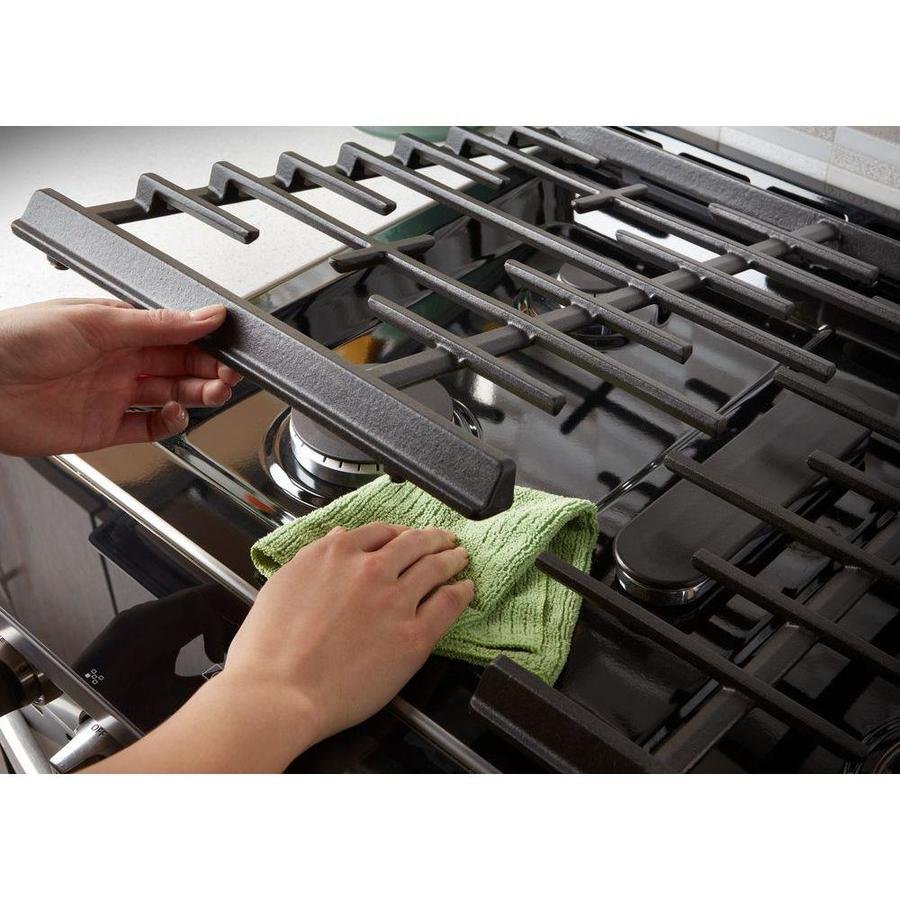 Whirlpool 5-Burner 5.8-cu ft Self-cleaning Slide-In Convection Gas Range
This gas range is a beast!  Not only is it beautiful it packs a ton of features that I use daily.  I love the sleek appearance and touch screen but did I mention that it is a smart oven?  It has Scan-to-Cook technology which means you can scan the barcode on a frozen package with the app on your phone or tablet and the oven customizes the temp and time for that item! There are presets as well such as frozen pizza or fresh pizza.  I’ve already used the fresh pizza option and the suggested time and temperature cooked the pizza perfectly.  This gas range has 5 powerful burners including a wok burner; I’ve never boiled water faster thanks to the Speed Heat™ burner.  The convection oven is large and has 3 racks!  I know I’m a bit excited but coming from my last oven which was painfully small, I’m over the moon to have all of that space.    I can go on and on about this stove but if you want to read more, click on the photo above. 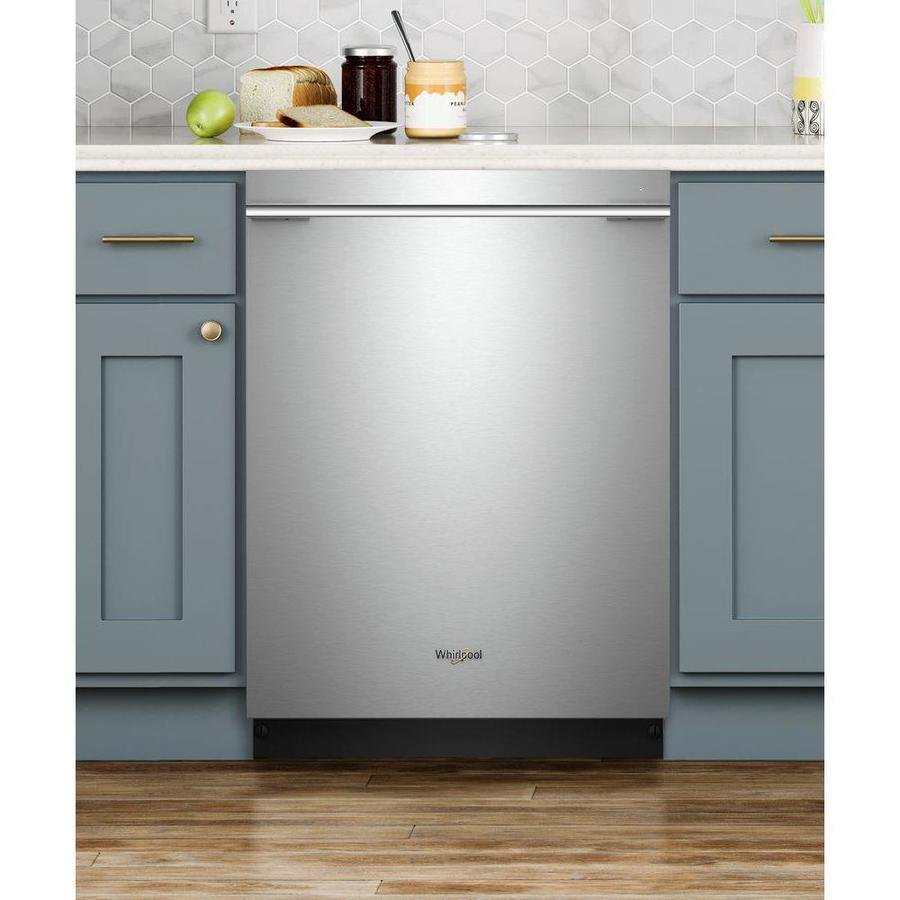 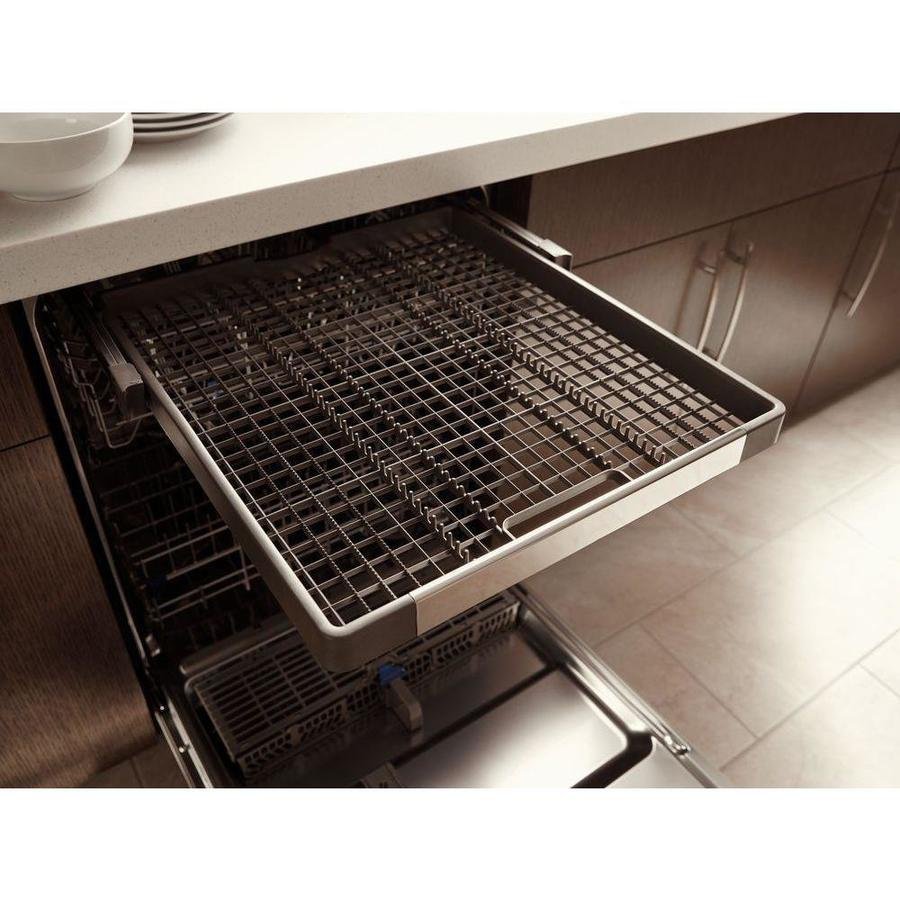 Whirlpool 24-in Fingerprint Resistant Stainless Steel Smart Dishwasher
Let me tell you, the dishwasher that came with this house is a sore topic for me.  I hated it for many reasons but mainly because it was super loud, loud to the point that I would have to turn up the TV when I was running a load.  And it never dried the dishes at all; we would have soaking wet dishes every single time!  This Whirlpool smart dishwasher is so quiet that I literally had to put my ear to the door to see if it was running!  I also love the fact that there’s a third rack because I can place my knives there where it’s out of reach from my 1 year old. He likes to help me unpack the dishwasher and I like that the knives are out of reach.  The third rack is also great for the odd pieces and adds 37% more rack room.  And when it comes to the drying issue my dishes are perfectly dry every single time!  Another feature that’s great for those of us with young kids is that top controls are hidden and it also has a control lockout feature which prevents the setting from being changed when the buttons are pressed. 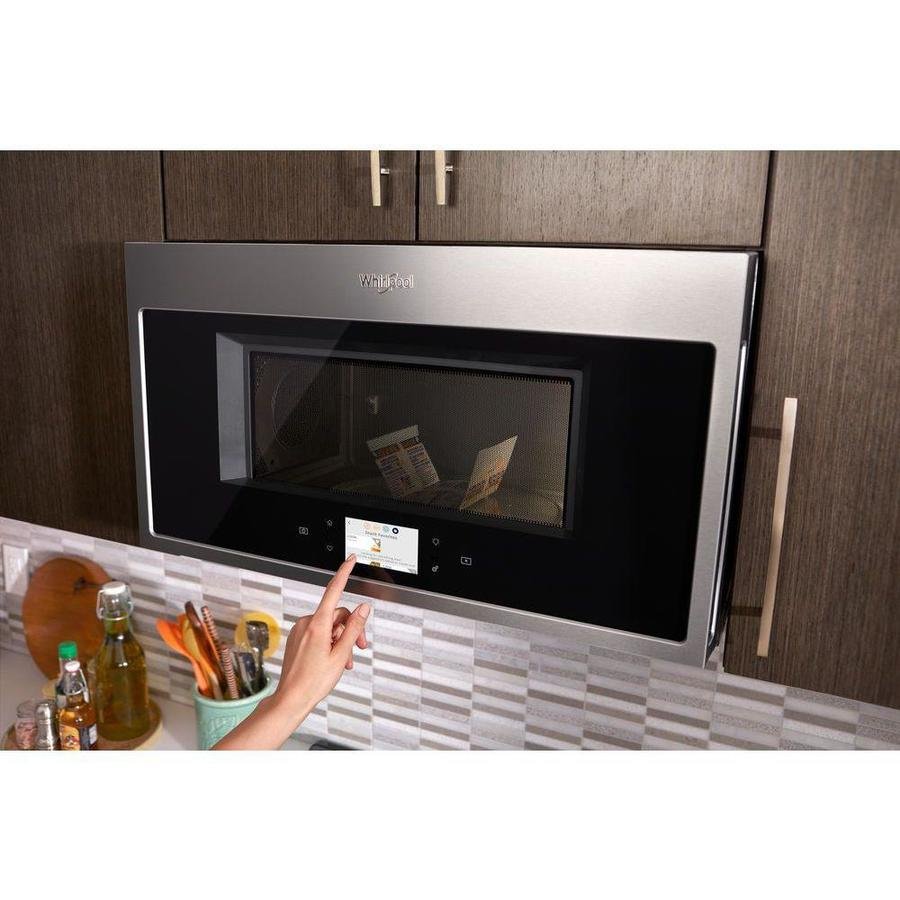 Whirlpool Smart 1.9-cu ft Over-the-Range Convection Microwave with Sensor Cooking
This microwave is so sleek and attractive; there a hidden grove which replaces the handle and the touch screen replaces the buttons.   This is another smart appliance which has way more that I could have ever imagined a microwave can do.  You can control it with voice commands if your hands are full and it even works with Google Home or Alexa!   Not only does this microwave heat food very quickly but I can also bake cookies or even roast a whole chicken thanks to the convection oven feature.  Yes this is both a microwave and a convection oven!  How cool is that?  I haven’t taken that feature for a spin just yet but I will soon! 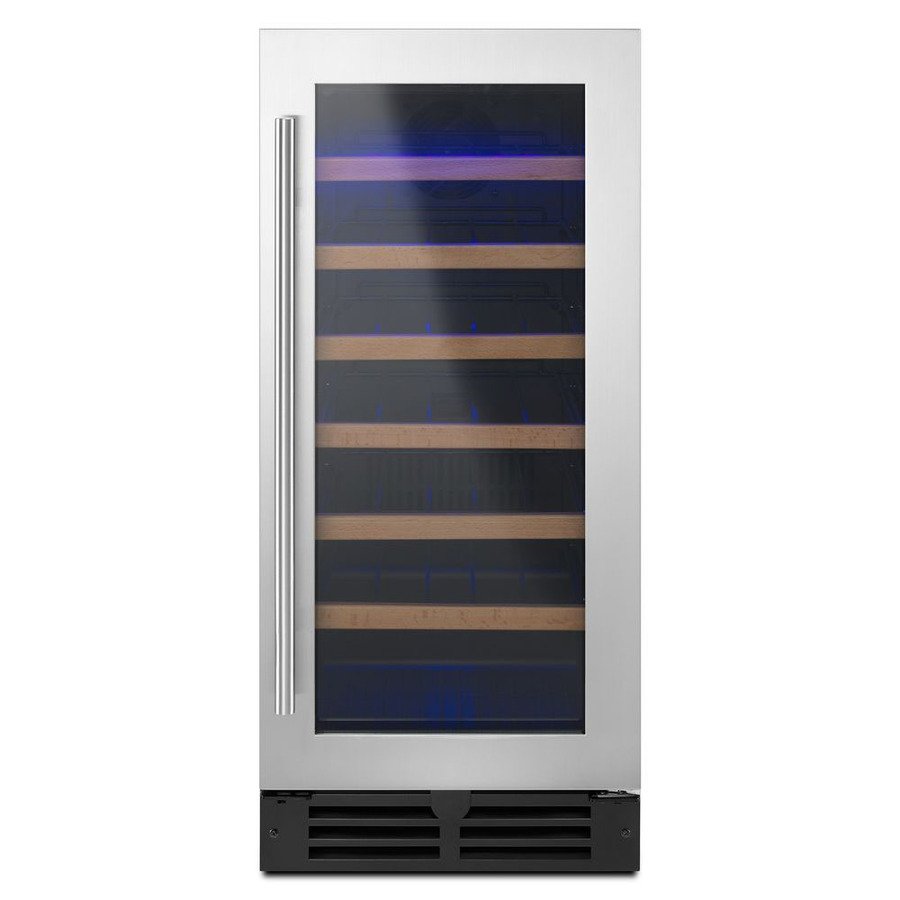 Whirlpool 34-Bottle Black-on-stainless Wine Chiller
This wine chiller was the icing on the cake.  It was totally a want!  I’ve been growing my bar and this wine chiller is an extension to that.  The size is deceiving; it holds 34 bottles of wine!  We have stored wine, beer and water so if you’re not into wine you can also store you favorite beverage.   It’s sleek, attractive and has LED lighting which just makes everything look better!

So there you have it folks!  I know I’ve said a mouthful but I there’s so much more to all of these appliances but I don’t want to lose you as I gush about them all so be sure to click the links and read more!  That’s it for now, next week I will share my kitchen reveal!

I’ve partnered with Lowe’s.  All opinions are my own.