Yesterday was Easter Sunday, and it was a very laid back day for me.  Instead of spending the day cooking a glorious spread, I bought a few pounds of snow crab clusters and a jug of cane juice and that pretty much summed up Easter Lunch/Dinner.   I started the day off with a trip to the miniature golf course where I played 27 holes.  I think I did well, I got a hole in one!  As for the overall score, lets just say we stopped counting since the second hole.

After golf I stopped at  the DeKalb Farmers market, which was packed with people in the Sunday best, and I picked up a few items.   Initially I had planned to cook some kind of salmon with roasted asparagus, a spring salad and some sort of fruity dessert, but after spending half the day in the scorching sun I was too pooped to even attempt such a meal.  So I settled on snow crabs…can’t say I missed the salmon because the crab was phenomenal!   We ate a much as we could and put away the leftovers, which was 4 clusters.  This morning I decided to make Chicken Alfredo, but I soon remembered the crabs in the freezer and made a quick change, Crab Alfredo it was.  I must say I’m pretty darn proud of myself, I am a crab picking fool.  I cracked open those legs with such speed and precision I even shocked myself.  Of course you don’t have to do what I did, you can simply buy lump crab meat.   Crab Take 2 was a success…I enjoyed this dish!

P.S. If you look closely at the photos you will notice that one of my herbs from my one pot herb garden has made a cameo..its my chives!! 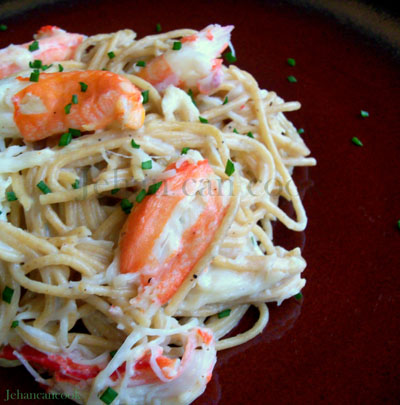 1 lb pasta cooked according to directions on box. (I used angel hair, you can also use fettuccine)

salt and pepper to taste

Cook pasta according to directions on box and set aside.  Melt butter over a medium fire, the stir in flour to make a roux.   Whisk milk slowly into flour and butter mixture.  Don’t add the milk too fast or  you will end up with a lumpy sauce.  On a low fire, add parmesan cheese, nutmeg, parsley, onion powder, garlic powder, cream cheese, salt and pepper.  Stir until well combined.  Add crab meat and cook until heated through.  Stir in the pasta making sure to coat it well,  garnish with additional chopped parsley or chives and grated parmesan cheese.