When we moved into this house one year ago, I was beyond happy, it check a lot of boxes for us and it was perfect house for us to raise our sons.  We moved primarily because we needed a bigger house and better school district for our kids, so we made the big jump from a townhouse in the city to a house in the county/suburbs.   We went with new construction so we were able to choose all of the finishings; we made the decision not to choose certain upgrades from our builder because we weren’t in love with some of the options available and some were overpriced. Some of the upgrades that we wanted we realized would be cheaper if we didn’t have the builder add it.    Some upgrades were almost double the market value and while we did pay for some upgrades, we decided to wait and do others after we had moved in. We plan on being in this home for about 10 years so we wanted to add our personal touches and the first step was to upgrade our builder’s grade kitchen.

Now don’t get me wrong, we didn’t intend on spending a ton of money because, well we just bought a house, and are on a budget but small changes can go a long way.   You will be surprised by the gems that can be found at you local hardware store and for an affordable price.  I’m thrilled to partner with Lowe’s on this project and will be taking you along on my journey over the next few weeks!  To add our own personal stamp in the kitchen we decided to upgrade the appliances, add a backsplash, replace the island pendant lights and the cabinet hardware.  We also wanted to add a wine cooler to the island.    In the upcoming weeks, I will share with you the changes that I wanted to make, which appliances I chose and why and then the final reveal of my kitchen so stay tuned!

We have quite a few projects that we want to do but we knew that one of the first would be to add a new backsplash.  When we were in the building process, I went back and forth as to whether to just choose from the options that the builder had.   Eventually I decided against it because I really wasn’t in love with any of the tiles offered and would be settling.   The wall color in our kitchen is a warm beige aka builder beige and is easily stained by flying food particles and oil so I knew that I wanted to add a backsplash sooner rather than later.   Another cosmetic change that I wanted to make was to change out the pendant lights that hung over the island.  They are functional but I wasn’t in love with them and lighting is another inexpensive way to elevate a space and Lowe’s has great lighting options at an affordable price. 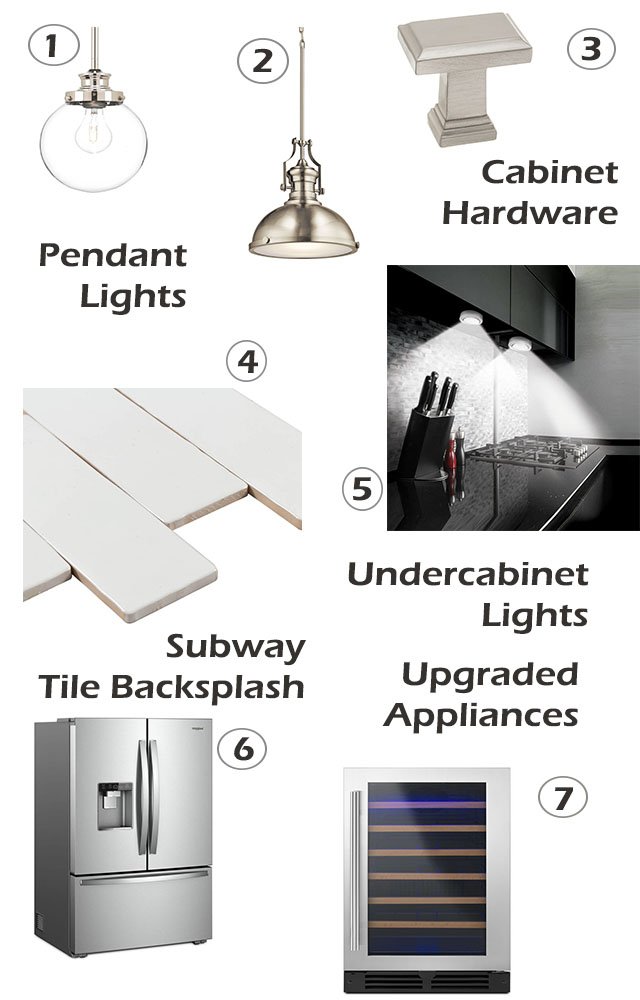 Having great appliances was also at the top of our list.  We did not like any of the appliances offered by our builder and as someone who spends a ton of time in the kitchen this was a big deal.   I hated the dishwasher because it was super loud and didn’t dry the dishes at all.  The stove was ok but had only basic functions.  I also wanted to upgrade our side by side refrigerator for a French door style fridge.  We’ve had this fridge for the past 10 years and planned on moving it to the garage as secondary storage.   If you follow me on Instagram then you know that I’ve spent a tremendous amount of time browsing my local Lowe’s appliance section and was impressed with the selection and prices that Lowe’s had to offer.   I love that they something for every budget including someone like me who loves all the bells and whistles but an affordable price.  As someone who is very picky that a big deal! Next week I will share with you which appliances I chose and why so be sure to tune it!

I’ve partnered with Lowe’s.  All opinions are my own.